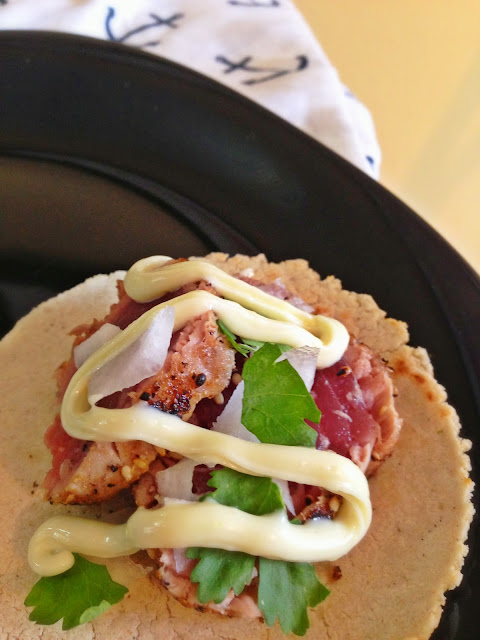 On the scale of difficult jobs, writing a blog about tacos is pretty low on the list - somewhere between finishing a paint-by-number and explaining the plot of a movie starring Kate Hudson (synopsis: "it was terrible"). But somehow after my last recipe post I was a little burnt out. I took some time away to make Indian food, pastas and eat out more than I should, but now I'm back and ready to bring you some more taco goodness.

For our first taco back, I chose a seared tuna taco. I'm not well versed in the preparation of fish, so I wanted a simple recipe that would be ready in a flash. Literally - you want to keep the centre of this fish raw, so you're only cooking on each side for about a minute. Ask your butcher for a tuna steak that will be okay to eat very rare. Some other recipes suggest you need sashimi grade fish, but I guess it depends on how fresh the fish is. Since I'm in Halifax, mine was basically still moving. 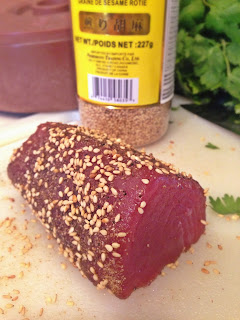 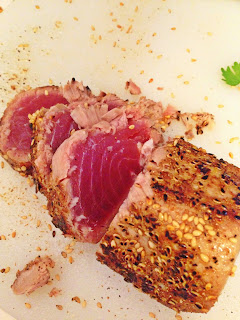 Since the tuna cooks so fast, get the sides ready first. Thinly slice the daikon and cabbage and chop the cilantro. Combine all in a bowl and mix with rice vinegar and lime juice. Add salt to taste.

Mix the mayo and wasabi, adding as much wasabi as your taste buds are up for.

Preheat a skillet on high, with vegetable oil. Coat the tuna in vegetable oil and sprinkle liberally with salt, pepper, coriander and sesame seeds until fully covered. When the skillet is at maximum heat, add the tuna. If your tuna looks like a traditional steak (two larger sides), cook each side for 90 seconds. If your tuna is a log shape, cook each of the 4 sides for 45 seconds. Remove from heat and slice thinly.

Place 2 tuna pieces in a warm corn tortilla, topping it with slaw and wasabi cream.